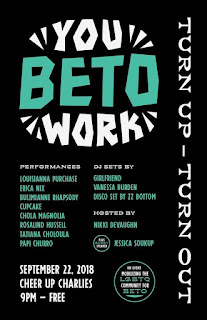 How many of y'all watched the debate last night?

I showed up last night at the Liberty bar in Austin to watch the Beto debate. I had been at a beverages for Beto the previous night and had promised to be the courier for flat Beto. Of course I stopped for an Earth Burger on the way to the event and so there was no parking. I was lucky I got in at all. If it weren't for Flat Beto I probably would have missed the debate altogether.

Through random chance, I ended up chatting with Sarah Marloff (OMG) and her friend. And Sarah said something I want to repeat.

The consequences of this election are life and death.

This is true for the lgbtqia community,

It's true for communities of color.

It's true for immigrants

It's true for women.

True to form; Republicans are not just going to let us have this senate seat or any of the other seats that we need to win this year.

The trolls are out and they're Amplified by Russian Bots, actual Nazis, and your annoying uncle that yells at you across the Thanksgiving table when he gets drunk.

My progressive daughter yesterday sent me an article. I could tell right away it was a republican hit piece on Beto because the headline referred to him as Robert “Beto” O'Rourke as if the same author would have referred to Rafael “Ted” Cruz the same way.

The point is we will see distortion, lies, false anger in place of nuance, and all of this is meant to make us feel like we should not vote and we can't let that happen.

Let's be clear about the consequences of this election.

Republicans including Cruz want to transform the federal Judiciary and pass laws to whittle away at marriage equality, make it impossible to live as out lgbtqia people and force us all back into the closet and roll back all of the gains since the Stonewall riots 50 years ago.

Vote Beto and the entire Democratic ticket to save marriage equality 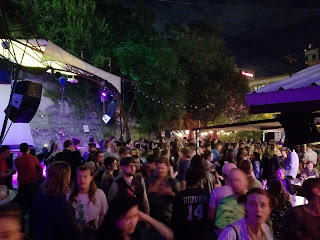 Vote Beto so we can participate in the economy without discrimination

Vote Beto so I can use the bathroom at the mall

Vote Beto so we can't be fired for being lgbtqia

Vote Beto so that trans people of color are not murdered with impunity.

Bring your friends to vote

Bring your family to vote

Vote like your lives depend on it because they do